Magician Leicester - Incredible close up magician for your wedding

Magician Leicester – Duncan William is one of the most in demand wedding magicians and close-up magicians in Leicester and around the Leicestershire area.

Duncan attempts to make securing his services as simple as possible. He aims to ensure he offers his prospective clients transparent reviews and transparent prices. However, if you are just start out looking for a magician to hire for your event then Duncan has some recommendations to guide you.

HOW TO HIRE THE RIGHT MAGICIAN FOR YOUR EVENT IN LEICESTER:

One thing you should always do first is ask your friends around Leicester or the Midlands for any recommendations. Some may have used a magician before or others may have heard of particular magicians who they have heard are good. There is nothing better than finding a recommendation from someone else. Magic, by default is amazing and astonishing. If this is the first time you are seeing magic or mind reading live you will no doubt be left amazed.

It is however, worth considering that which ‘magic tricks’ or ‘magic illusions’ are often what you are paying for, it’s also worth considering the entertainer’s personality too. If you are hosting a Gothic party and all of your friends are ‘alternative’ then a traditional magician may not fit the bill. If you and your friends love to giggle and laugh more than anything else, then you may consider a comedy magician. However, a word of warning here, in that comedy is again, very subject and does not appeal to all. Magic on the other hand, has a universal feel to it. So, once you have asked around for recommendations it is worth also doing your own research on the entertainer’s credentials and performance background.

Whilst reviews online can easily be faked, with some consideration, Google reviews are a lot more difficult to manipulate.

However, to check, if the reviewers all have unusual names, or have only written one review, then there is likelihood they may not be authentic. Consider comparing the quality of Facebook reviews, with yell reviews or Google reviews and you will soon build up an authentic picture of the act.

You can also contact some local venues to see if they have any recommended suppliers. Duncan has worked extensively throughout Leicester and some of his favourite venues include Kilworth House Hotel, Empire Banqueting & Conference Hall and Barnabas Hall.

Duncan should be your first call, if you searching for a local Leicester magician that is truly unique, entertaining and highly memorable and you can read some of his reviews below:

"Thank you Duncan for attending our ball. I know we were all a little tipsy but your magic was absolutely incredible. If you are in Leicester and are having a party then get Duncan in! 5 out of 5 stars for sure!"

"Wonderful magic from a really friendly guy. Everyone on the committee agree that Duncan was brilliant and we would all wholeheartedly recommend him. If you want something to bring your event to life, then get in touch with Duncan."

"Fantastic close up performances for our work event. We have hired a few over the last 20 years of my tenure, but Duncan was certainly the best to date! We all highly recommend him!"

HERE ARE 5 SOLID REASONS WHY YOU SHOULD HIRE DUNCAN AS YOU MAGICIAN IN LEICSTER: 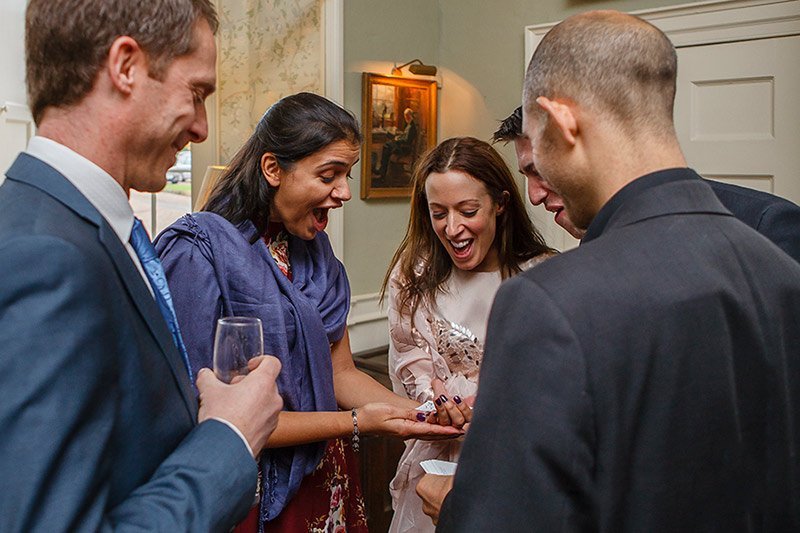 HIRE DUNCAN AS A CLOSE UP, AFTER DINNER OR WEDDING MAGICIAN IN LEICESTER

The FIRST time to use the services of a wedding magician is during the wedding breakfast.

This is the first meal of the day as newly-weds and what better way to increase it memorability than with some magic and mind reading? Perfect, between the courses, or for a cabaret show at the end of the meal – Duncan can customize his act to your requirements and timings. 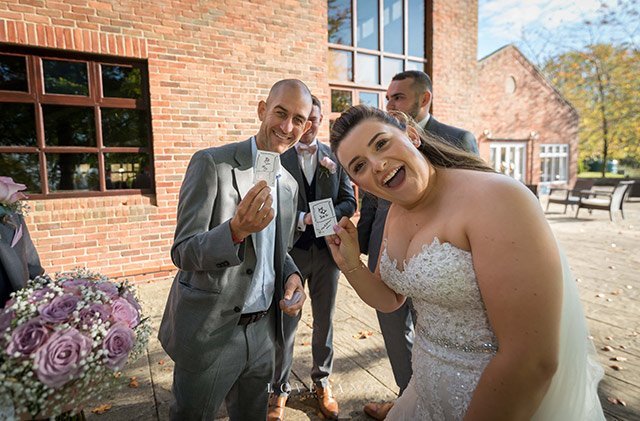 The SECOND time to hire a close up magician Leicester is whilst the photos are being taken.

This is a time that so often causes a lull in entertainment throughout the day and this is an ideal time to inject some laughter, amazement, cheeky humour and FUN without the rigidity of other more traditional performances. 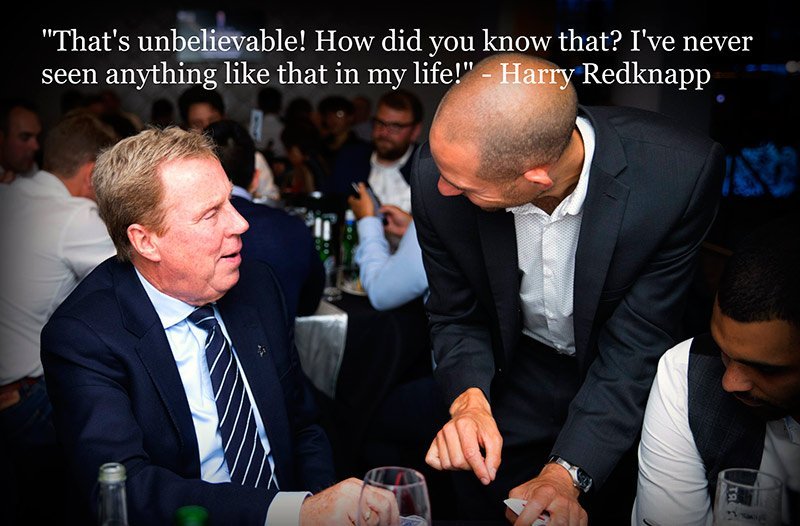 After dinner magician in Leicester

The THIRD most popular option (not in any particular order) to book Duncan is as an after dinner magician in Leicester.

For some guests, they won’t want to be dancing, others may not find a comedian funny, but what will get the party started and gasps whirring around the room – is magic. It is easy to transcend barriers with magic. It’s even easier to lubricate conversations.

But first and foremost, it’s fun. It offers a sure fire route to get the evening guests feeling part of the party environment.

If you are wanting to hire Duncan for your wedding, private party or conference in Leicester then do not hesitate in getting in touch. Duncan often gets booked up months and even years in advance, so if you had a date in mind, give him a call now, to check availability.

GET IN TOUCH WITH DUNCAN FOR
A NO YOUR EVENT IN LEICESTER:

Do you need a magician for your wedding, private party or event?

If you need a professional, reliable entertainer that’s guaranteed to make you day extra special you should give Duncan a call. Many of his clients have been brides and grooms, business managers and event organisers and each of them have relied on Duncan to deliver the wow factor to their event.

How will Duncan bring that WOW factor to your event? Here's how Duncan achieves it:

Duncan is not your standard magician. His act blends tried and tested commercial routines with hard hitting feats of mind reading which is perfect for all ages. With over 15 years as a professional, Duncan has a track record for ensuring each client is a satisfied one. You can read some of the reviews here.

How much does it cost to hire Duncan as a magician in Leicester?

The same as any item or service you purchase, you pay for what you get. There is a phrase which goes like this: “If you think it’s expensive to hire a professional, try hiring an amateur.” Essentially, you get what you pay for. This is the same in the world of magic, mind reading or illusions. Whilst prices may range from £100 to £1000, the quality at the lower end of the scale will be poor. Often they will be amateur magicians looking to earn a bit of pocket money following their hobby. At the top end, you simply end up paying for TV credentials or outdated awards. That said, if you hire a magician in the top third of pricing structure you can guarantee a lot higher level of service, professionalism and engagement with your guests. It is well worth paying extra for a full time professional magician in Leicester to ensure that you are congratulated on hiring some amazing entertainment. Hire the wrong entertainment and if they have been hired for a couple of hours, things could get awkward.

How should I choose a magician for my event?

The following consideration after deciding on a shortlist of magicians will be to watch some show reels. Of course you can be lulled into a false sense of security with some sparkly video but try not to. You will get a feel of the performer and their performance style. Following this, some magicians in Leicester, may offer you the opportunity to meet up for a free demonstration. This is a perfect opportunity to meet with the person who will be entertaining your guests as your party. They need to be professional, warm, approachable and friendly. These traits are as important as a competent magician as you may as well just secure the services of a magician robot.

Once you have made a shortlist of some performers and finally settled on one, it’s now time to get in touch. Most magicians will have a contact form requiring you to fill out certain details, email address or phone number for you to contact them on. Check their availability and then ensure they send you a confirmation email or sign a contract. This is often supported by securing the booking with a deposit. Duncan asks for a £50 deposit with the rest you can pay on the day whilst other magicians may ask for 50% or 100% up front. Always check their terms and conditions, making specific note of their payment terms and refunds.

What makes Leicester great for weddings and events?

In recent years Leicester has positioned itself on the global map by winning the Premier League title in 2016. This brought much acclaim to the city, people bought many Leicester city football shirts and the profile of the city was raised significantly. Leicester is the 13th most densely populated city in the United Kingdom and is a city Duncan is regularly booked to perform. Since the Second World War, Leicester city has seen extremely high levels of immigration. The city is home to large communities of Polish, Pakistanis, Indians, Ugandans and Kenyans. As a result, being booked to perform as a magician in Leicester is always exciting. You never know what kind of event you will be invited too. In 2011, the local census reported that over 50% ethic minority population meaning that it has become the first City in the United Kingdom not to have a majority white British majority.

Duncan is often booked to perform as a magician at Asian weddings or Polish parties and get to experience a range of cultures. If Duncan performs at Asian parties, he takes extra care to understand any cultural etiquette. Some of the more popular areas that Duncan is hired to perform at in Leicester include, Braunstone, Evington, Beaumont Leys, Northfields, North Evington and central Leicester areas. Inner city Leicester is home to a great many bars, clubs, restaurants and private venues and the people of Leicester are always extremely hospitable and welcoming for Duncan’s magic. With an ever growing Leicestershire population, Duncan hopes to retain his crown as the most popular magician Leicester.

Does Duncan perform any public magic shows in Leicester?

Unfortunately the majority of bookings for Duncan are his private bookings in and around Leicester. These are most commonly at weddings, corporate events or private parties. Most bookings are in the evening, and most commonly at the weekend. As a result it makes it a little difficult to perform public shows as this will compromise private bookings. That said, Duncan does occasionally perform private Theatre shows. These are rare and when they are advertised, they often sell-out fast. Some people who have seen him at corporate events are keen to bring their partners and family to watch the show. If you were interesting in collaborating for a public show Duncan does consider these too. Occasionally Duncan is hired to perform at fetes, festivals and pubs or bars. On these occasions his performances for the public are free. That said; feel free to get in touch via his contact form if you have a suggestion to collaborating in hosting a ‘night’ theatre show or another exciting concept.

Do you have any reviews from events in Leicester?

Here are a couple of recent reviews:

“We booked Duncan for 2 hours and his skills and craft really shone through. He was the perfect gentleman and his routines, magic and mind reading were AMAZING!! Highly recommended!” Carolyn Hind

“Many thanks for making my 50th birthday celebrations on 5th July super special! We love eating out at the Feast of India and you brought that ‘extra something’ to the celebrations’. Everyone was left confounded by your magic and giggling by your humour. A massive thank you again for your addition to a truly memorable party. ”

What areas of Leicester does Duncan cover?

Some recent venues Duncan has performed at include: