Looking For a Specific Type of Magician For Your Event?

A close-up magician is somebody who does just that – perform up close in front of your guest’s eyes. A close-up magician like Duncan is perfect for magic during the drinks reception at a wedding or an evening soiree. Close-up magic is pure, incredibly elegant, and is the closest you can be to touching and experiencing magic.

WATCH DUNCAN'S CLOSE UP SHOWREEL BELOW

A table magician doesn’t have the same flexibility of close up or strolling magician. They are often experts at card magic where they need a table to execute shuffles and display cards. They can have a group seated around them and perform to small groups. This is perfect if you want a magician featured in one part of the venue and guests to visit them to experience five or ten minutes of mystery and wonder.

A conjuror is a more traditional word for a magician. You can liken it to calling a doctor a physician. A conjuror is usually skillful at card manipulation, rope tricks, billard ball manipulation, cigarette tricks, and more. Conjuror is a word less used these days but some people from an older generation still use it to refer to magicians.

One of Duncan’s act’s is a comedy magic show. Here he uses a human ventriloquist mask to integrate into his magic. A comedy magician often places a high weight in comedy and sometimes the silliness of his magic. A perfect example of a comedy magician is Tommy Cooper whose gags and humor were often more memorable than his magic or sleight of hand, despite him being highly skilfull.

A parlor magician is a more Americanised phrase but refers to a magician who performs to small groups. They may or may not have a stage or cabaret show but perform their close-up set to a small intimate group of guests or performers. This act may feature cards, coins and maybe some mentalism or mind reading.

Andrew Basso is perhaps the most well-known escapologist in recent times. Escapology involves escaping from ropes and handcuffs often before a rope burns through, you run out of oxygen whilst holding your breath underwater or more. Harry Houdini was perhaps the world’s most famous escapaologist.

A card manipulator is someone who spends their time devoted to card manipulation, card flourishes, and occasionally card tricks. Card manipulators can vanish and reappear playing cards invisibly and their art takes many years to reach a high level of perfection. Juliana Chen is a world-famous card manipulator.

Much like a card manipulator, a dove manipulator or magician is highly skilled in producing doves from nowhere. Often hidden in the sleeves and secreted around the body – dove manipulators are experts in producing multiple birds at their fingertips. Some of the modern-day experts at Dove Manipulation include touring Illusionist – Dan Sperry.

Britain’s Got Talent and America’s Got Talent have showcased some of the world’s finest sleight of hand magicians. Shin Lim is perhaps the most famous who now boasts a Las Vegas residency. Sleight of Hand magicians elevates magic to a new art form by combining card magic with other forms of magic to create incredibly elegant theatrical pieces (often with playing cards as their vehicle).

A cruise ship magician is a magician who performs almost exclusively on cruise ships. Often they are flown from ship to ship and perform on the world class stages and theatres that are housed within this luxury liners. Most cruise ship magicians perform 2 40-45 minute stage shows and occassionally perfrom a little close up magic for guests too.

A mentalist is another word for a magician who uses magic suggestion, psychology, influence and persuasion to create moments of wonder and magic using the mind as opposed to playing cards. Duncan William is one of the most recognised commercial mentalists and his act includes unlocking mobile phones, telling people the name of their first girl or boyfriend, as well as other information there is no way he could know. This is extremely commercial, high impact, and perfect for weddings, parties, and corporate events where you are looking for something unique and contemporary.

Some audience members or wedding guests – they may think of a mentalist as a crazy person – so an easier way to redefine the magic of the mind is as a mind reader. Of course, there is no such thing as real mind reading but some of the demonstrations Duncan performs will leave you thinking that mind-reading is possible!

A silent act when performed perfectly can take you around the world as it transcends all language barriers. A silent magician may perfrom visual gags, highly visual magic and some slapstick often choreographed with music to keep your guests amazed, enthralled and leaving have had lots of fun. Whilst not magic, one of the most famous and popular silent acts in the world today is Tape Face.

A digital magician is someone who combines modern technology with traditional magic techniques meaning that your are treated to some highly contemporary magic.

Much like a digital magician – a tech magician, like Duncan William (who performs as The Cyber Magician) uses iPhone, iPads, and a range of other tech gizmos and then combines them with his magic to make for a highly interactive contemporary experience.

In the same vein as a tech or digital magician, an iPad magician uses technology to perform incredible magic and mindreading demonstrations. These are all integrated with his iPad and her even customizes his routines for clients too such as producing vouchers or giveaways out his iPad for clients at trade shows or events.

The most recent type of magician – borne out of the recent pandemic is the virtual magician or zoom magician. Duncan quickly established himself as one of the leading virtual magicians globally and performs incredible magic and mindreading – to the same high standard over Zoom. His virtual magic is highly interactive and great fun which allowed and still does allow clients to bring teams and clients together from all over the world.

If you were considering bring a magician to your event and needed help with the right style, Duncan is highly versatile and performs a range of styles. To learn more, to check availability or to have a no-obligation chat, drop him a message below.

How To Do Magic 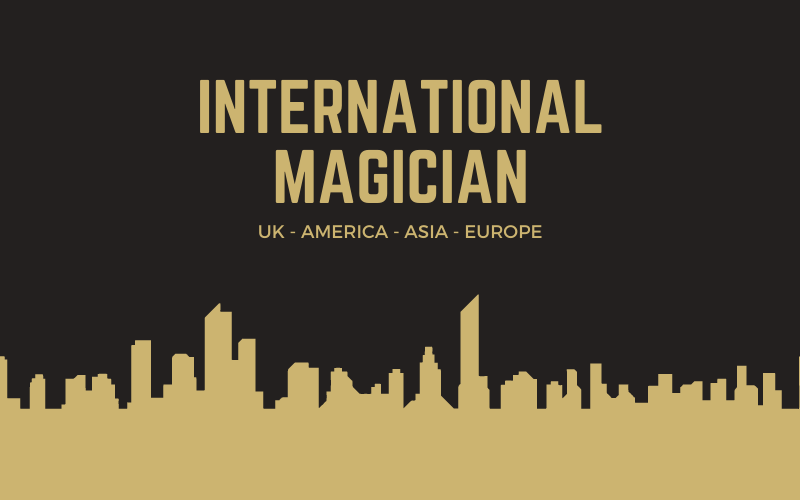